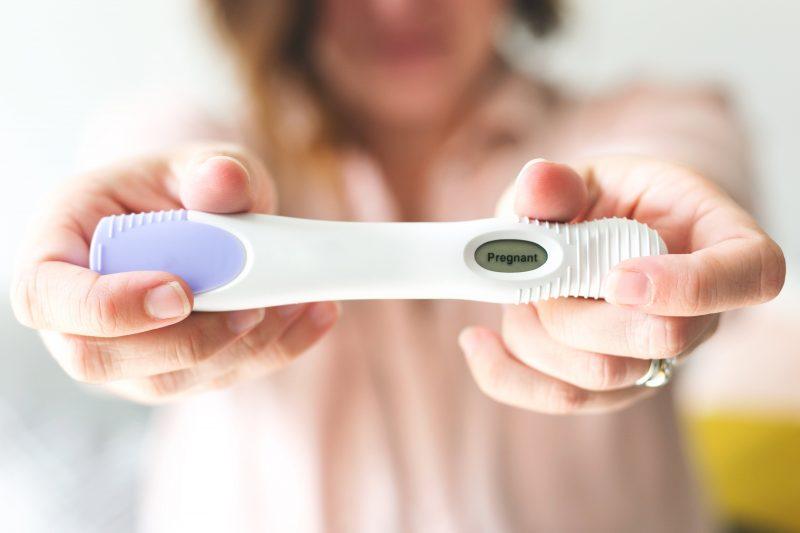 This question frequently comes up, and physicians (ob/gyns, radiologists, even fertility specialists) often get tripped up by it. I saw two patients this week who came in with the wrong diagnosis, even though it's pretty straightforward to distinguish the two conditions, and it doesn't require any fancy imaging. One of the patients had been told to give up and use a surrogate! (She now has two healthy children that she carried herself.) What follows is the conversation that I have with patients who present with this question. 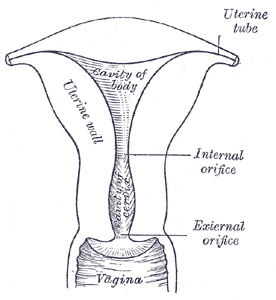 The fallopian tubes, uterus, cervix, and upper vagina begin development as two parallel tubular structures – these are the mullerian ducts. During embryonic development, the lower part of these structures grow together – this process is called fusion. Then the parts that are fused together disappear to form a single (larger) tubular structure – this process is called resorption. The fused (and partially resorbed) part of the mullerian ducts becomes the uterus, cervix, and upper vagina. The (unfused) upper part becomes the fallopian tubes. The diagram at left shows a cross-section of a normal uterus.

When this embryonic process goes awry, a number of different genital birth defects can occur. If there is no fusion, two separate uteri result (this is called uterus didelphys). The will be two separate cervices, and sometimes two vaginas. If fusion occurs only at the very bottom of the ducts, you get a bicornuate (“two horned”) uterus. The diagram at left is a cross-section of a bicornuate uterus. Note that the upper part of the uterus consists of two distinct structures separated by a cleft. Women with a bicornuate uterus are at an increased of (late) miscarriage, preterm birth, and abnormal fetal lie (usually breech). Although there is a surgical procedure described to fix a bicornuate uterus, it is no longer recommended by experts in the field, because: (1) the pregnancy outcomes are quite good if you just stitch up the cervix in the next pregnancy, and (2) it's a fairly drastic operation, involving cutting the uterus open and sewing it back together.

If fusion occurs but resorption is incomplete, you get a septate uterus. Here is the diagram of a septate uterus. In the middle of the uterine cavity is a fibrous, avascular partition (the septum). Note that from the outside, the top of the uterus appears normal. (It's generally a bit wider than normal, but the top has no cleft just like a normal uterus.) Women with a uterine septum have twice the risk of miscarriage as other women, and they are more likely to have problems with preterm delivery and breech birth, too. The treatment for a uterine septum is to just cut the septum with scissors, and this can be done as an outpatient.

Generally, a woman finds out she has a bicornuate or septate uterus when she gets a hysterosalpingogram for infertility or recurrent miscarriages.

Here are some normal uterine cavities on HSG: 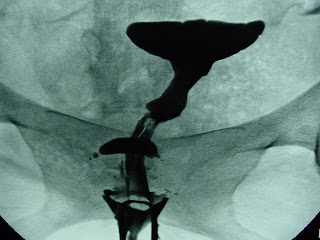 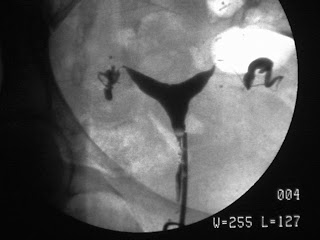 Note that the uterus in the lower photo has a bit of a curve in the top of the cavity. This is a normal variant.

Now take a look at these HSGs: 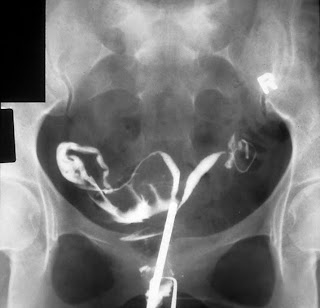 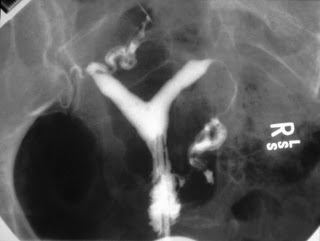 There is an obvious cleft in the uterine cavity. This HSGs are commonly read as “bicornuate uterus” by some physicians, but in reality it could be a septate uterus or a bicornuate uterus. Let me state this again: YOU CANNOT DISTINGUISH A SEPTATE UTERUS FROM A BICORNUATE UTERUS WITH A HYSTEROSALPINGOGRAM. Yes, I know there was a paper published years ago which said you could distinguish them by measuring the angle between the cavities, but it just ain't so. The two tests which can best distinguish a septate from a bicornuate uterus are a transvaginal ultrasound and a pelvic MRI.

Now, the sad thing is that one of my recent patients actually had an MRI, and the diagnosis was still missed. It turns out that not all radiologists understand the difference between a septate and a bicornuate uterus. They often just put “uterine duplication” in the MRI report, and that's what probably happened with my patient.

The next post will show how to distinguish a septate uterus from a bicornuate uterus using transvaginal sonography.