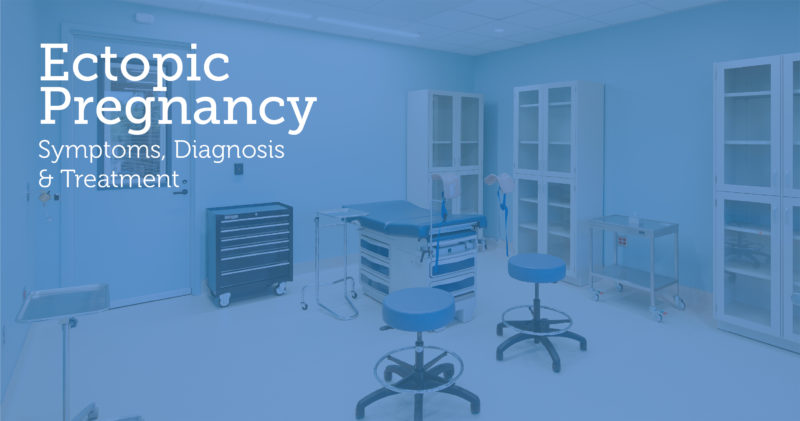 In a healthy pregnancy, a fertilized egg finds a home in the lining of the mother’s uterus and begins to grow. In about one out of every 50 pregnancies, though, the fertilized egg attached somewhere other than the uterus. This is called an ectopic pregnancy, and prompt treatment is necessary for the mother’s health and future fertility.

What is ectopic pregnancy?

Ectopic pregnancy, also known as extrauterine pregnancy, happens when a fertilized egg grows outside of the uterus. The most common type is called a tubal pregnancy, in which the egg implants in the fallopian tube, but they can also occur on an ovary, the cervix, or somewhere else in the abdomen.

Ectopic pregnancy is a serious condition — a woman’s body isn’t built to sustain a pregnancy outside the uterus, and it can cause severe bleeding. If doctors are able to catch and treat it early, serious complications can be avoided.

What causes an ectopic pregnancy?

Ectopic pregnancy can occur for a number of reasons, and you may never know why it occurs. Some factors in your life do increase your risk of ectopic pregnancy.

Ectopic pregnancy can also happen if you have a damaged fallopian tube. Because fertilization of the egg occurs in the fallopian tube, a damaged one could prevent the egg from getting into the uterus. On the rare occasion that you might get pregnant while using an IUD, you’d have an increased risk of ectopic pregnancy.

What are the symptoms of ectopic pregnancy? How can you diagnose it?

Ectopic pregnancy can have serious complications, including rupture of the fallopian tubes. If you have serious symptoms — heavy vaginal bleeding, severe pain, or lightheadedness — contact your doctor right away.

If your doctor suspects ectopic pregnancy, they’ll usually start with a pregnancy test and a pelvic exam. They’ll also likely do a blood test to check levels of certain hormones. Your doctor might also perform an ultrasound to look at your uterus and fallopian tubes.

How is ectopic pregnancy treated?

A fertilized egg can’t survive outside the uterus, and your doctor will have to remove it to prevent those serious complications. They’ll likely do this using medication or surgery.

Medication. If your pregnancy isn’t far along and the fallopian tube isn’t in danger of rupture, your doctor will likely give you a shot of a medication (methotrexate is most commonly used) to stop the cells from growing. Your body will absorb the cells over time.

Surgery. If your pregnancy is more advanced and the fallopian tube is damaged, your doctor will need to remove it surgically. The simplest way to do this is through a procedure called laparoscopic surgery. This uses small instruments and a small camera, inserted through a small incision, to remove the pregnancy. The doctor will also repair or remove the damaged fallopian tube during the surgery. In an emergency, if you were experiencing severe symptoms, or if the laparoscopic surgery was unsuccessful, the doctor might have to perform a procedure called a laparotomy, which uses a larger incision.

There’s no doubt experiencing an ectopic pregnancy can be alarming, but the good news is your chances of conceiving and going on to have a totally healthy pregnancy are very high.

A couple of things to keep in mind when considering getting pregnant after an ectopic pregnancy… First, most doctors advise women to wait around 3 months to conceive if you received methotrexate injections. Second, once you’ve had one ectopic pregnancy, you are more likely to have another one. Therefore, it’s important to have a fertility specialist closely monitor future pregnancies and to seek medical attention as soon as you detect a positive home pregnancy test.

Alabama Fertility is here to help.

Ectopic pregnancy is unfortunate and scary, but it’s not the end of your hopes for a family. Alabama Fertility wants to help you start or grow your family. Contact us to learn more about conditions like ectopic pregnancy and the options we offer to give you the fertility care you need.